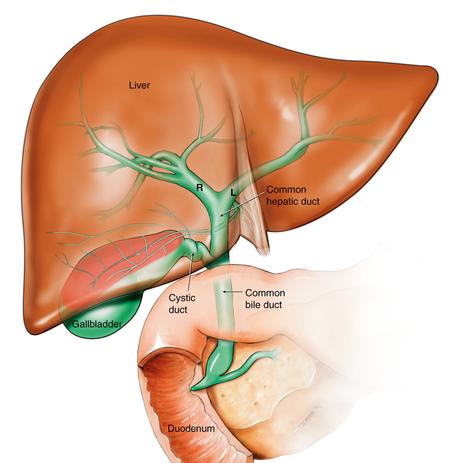 The hepatobiliary system refers to the liver and bile ducts located in the right upper abdomen.  The liver weighs approximately 3 pounds and is the second largest organ of the body.  The liver has many important functions that include removing toxins from the body and processing medications, processing the food we eat to make and store energy, making proteins and factors that help blood to clot correctly, and making bile.  The liver makes and releases bile through the bile ducts which travel outside the liver and empty into the intestine, storing some bile in the gallbladder to help with digestion of fats when we eat.

Diseases of the liver and bile ducts include infectious and inflammatory processes and benign or neoplastic (cancer) tumors, which may be cystic, or fluid filled, or solid.

Tumors of the liver are usually detected on imaging tests such as ultrasound, CT and MRI.   Imaging of the liver is often prompted by abnormal liver enzyme tests, abdominal pain, surveillance imaging of high risk patients with chronic liver disease or as an incidental finding during imaging performed for another problem.  Frequently, we can differentiate benign from malignant tumors on imaging without the need for biopsy.   Malignant tumors may include those that arise from the liver cells (hepatocellular carcinoma), bile duct cells (cholangiocarcinoma) or another site and the cells spread to the liver, which is referred to as metastasis.  Characteristics on imaging can also frequently diagnose the origin of the tumor and the liver surgeon uses that information to determine if any further testing should be done prior to treatment.  A healthy liver has the unique ability to regenerate, which allows the liver surgeon to remove or resect a portion of liver to manage these tumors when appropriate.  Other liver directed options, which may include thermal ablation as well as other procedures, may be offered as well in certain instances.  Minimally invasive surgical options including laparoscopic liver resections may also be appropriate in many situations.

Gallbladder cancer is a rare cancer that often has no symptoms in the early stages.  The gallbladder is an organ just below the liver under the rib cage on the right side of the abdomen.  The liver makes and releases bile to help digest fat in our diet, and will store extra bile in the gallbladder to release it when a fatty meal is eaten.  Some of the symptoms that may develop with gallbladder cancer may be similar to other gallbladder or bile duct disease, such as stones.  These symptoms can include abdominal pain, jaundice and weight loss.

​Bile duct cancer can occur in any part of the biliary tree.  The biliary tree is a system of ducts, or small tubes, that begin in the liver and come together to form a single common bile duct that drains the bile made in the liver into the intestine.  The common bile duct travels through the pancreas to drain into the first portion of the intestine, which is the duodenum.  Cancer that begins in the ducts within the liver may present as a liver mass, whereas cancer that begins in the ducts outside the liver may present with jaundice and swollen or dilated ducts.  Based on the location of the mass, stricture (narrowing) or suspected cancer, surgery may involve removal of any part of the biliary tree and could involve liver resection, bile duct resection alone or the Whipple procedure if the lowest portion of the duct is involved.   Surgery is recommended in the setting where surrounding vital structures can be separated from the tumor to allow removal of the cancer completely.  Surgery may also be necessary to divert bile drainage to relieve blockage of bile.