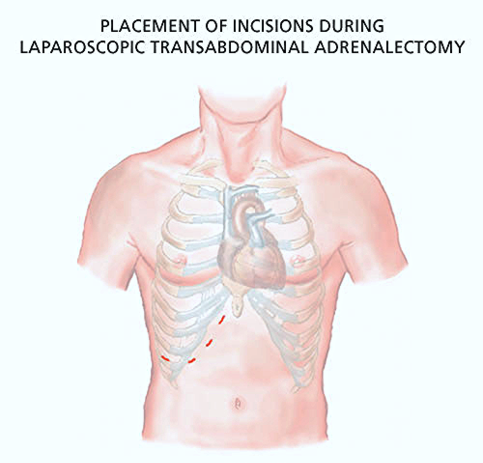 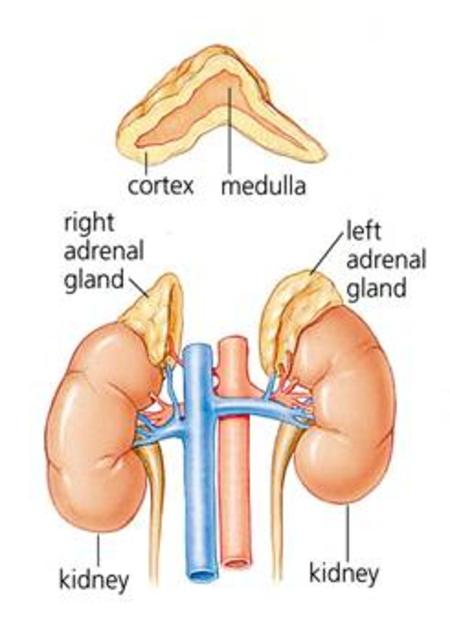 The adrenal glands are endocrine glands sitting on top of the kidneys on both sides of the abdomen within a space of the abdomen called the retroperitoneum.  They are glands that secrete some very important hormones.  Some of the main hormones are described below:

Abnormalities occur in the adrenal glands when solitary tumors develop in one of these areas.  Commonly the tumors are encountered incidentally when people undergo CT or MRI scans of the abdomen for other reasons.  However, sometimes people will present with excessive hormone release of one of the above hormones as a result of a tumor.  Most tumors of the adrenal gland are not biologically active.  When they are people may present with the following symtpoms:

Surgery is recommended if you have a tumor that is functional or a non-functional tumor that is suspicious for adrenal cortical carcinoma (adrenal cancer). This is determined by the size, growth and imaging characteristics of a mass seen on the adrenal gland.   Cancer of the adrenal gland is rare but is difficult to prove without pathologic confirmation.  It is rare that only the mass is removed without removing the entire gland as recurrence can be a problem.  Also, it is rare that both adrenal glands are removed.  If surgery is recommended resection of the adrenal gland is commonly done laparoscopically.  This involves between 3 to 4 small incisions within the abdomen to remove the adrenal gland with the tumor.   People will usually stay in the hospital up to 2-3 nights.  Modifications to blood pressure medications or cortisol/steroid medications depend on how people do post-operatively.

For more information regarding adrenal gland disease and surgery please visit the adrenal resources at the following site: