Gastrointestinal surgery or GI surgery encompasses many procedures done on the organs of the GI tract.  The GI tract within the abdomen includes the stomach, small intestines and colon.  There are a number of conditions that can take place anywhere along this tract that may require surgery.  A small portion of them are covered here.

The stomach is the first portion of the GI tract within the abdomen.  It is an organ that receives food from the esophagus within the chest and has a major role in the initial digestion of food, particularly proteins.  The normal structure of the stomach is complex.  It is composed of muscle important in physical churning of food.  Additionally, the inside lining of the stomach is made up of small folds called rugae that expand as food enters into the stomach to allow for large quantities of food to be stored as it undergoes initial digestion.  The stomach also makes gastric juice which is the main mechanism by which food is digested.  The juice is made up of many things including hydrochloric acid (a strong acid that breaks down food and other foreign materials) and pepsin (an enzyme used to digest protein).  Because of the highly caustic nature of the acid the stomach protects itself with an inner lining against the acid so that the stomach itself doesn't get digested.  The stomach also has barriers within it to prevent acid from moving up into the esophagus (lower esophageal sphincter) and into the first portion of the intestines known as the duodenum (pyloric sphincter).

Gastroesophageal Reflux Disease or GERD is known as a condition where there is chronic damage to the inside lining of the esophagus as a result of the stomach acid coming up from the stomach into the esophagus.  There are a lot of reasons why this can happen.  The main reason this happens is due to structural abnormality of the lower esophageal sphincter allowing for the pressure in the stomach to be higher than the sphincter itself allowing for gastric juice to enter into the esophagus.  This can happen as a result of hiatal hernias and obesity.  Additionally, reflux can take place when there is higher than required acid within the stomach.  This can happen as a result of Zollinger-
Ellison syndrome or high blood calcium levels.  Long-term damage to the inside lining of the stomach can cause symptoms of burning chest pain, belching, bad breath, hoarse voice, sore throat and chronic cough.  More importantly, this chronic damage can cause changes to the lining of the esophagus that can sometimes lead to esophageal cancers.  Today, the mainstay of treatment requires acid suppression with medicines such as proton pump inhibitors (ex:prilosec, prevacid, nexium, protonix), H2 receptor blockers (zantac, pepcid, tagamet).  Esophagogastroduodenoscopy (EGD) is commonly performed to monitor for changes in the esophagus and sometimes involves biopsies as well.  Surgical treatment for this condition is reserved in patients with hiatal hernias and those in whom medical management has failed or can not take medications long-term.  Some testing is required prior to surgery to understand your anatomy and physiology prior to intervention.  These tests may include an upper GI study (x-ray with oral contrast to look at the particular anatomy), pH probe testing (determining if acid is refluxing into the esophagus), esophageal monometry (looking at the contractions of the esophagus), EGD (determining anatomy and also assessing esophageal lining damage).  Once surgery is decided upon the procedure is performed laparoscopically.  The procedure is known as a Laparoscopic Nissen Fundoplicaton.  The tenets of the surgery required reducing an hernia that may exist at the esophageal hiatus (where the esophagus enters the upper portion of the abdomen) and re-creating a new esophageal sphincter.  This is done by taking the upper curve of the stomach and wrapping it around the stomach.  It is then sewn into place so that the lower portion of the esophagus passes through a small tunnel of stomach muscle.  This is thought to reduce the amount of acid backing up into the esophagus and allows the inside lining of the esophagus to heal.  When performed laparoscopically patients will stay in the hospital up to two nights.  They are discharged home on a pureed diet that is ultimately advanced to a soft diet.

Another issue of the stomach includes peptic ulcer disease.  These are defects in the inner lining of the stomach or duodenum (first portion of intestines) that extend into the next layer of the organs.  Normally, there is a protective barrier that prevents acid from injuring the delicate lining of the stomach and duodenum but when they are broken down as a result of excess acid or breakdown of the protective lining itself it will result in an ulcer.  Causes of breakdown of the lining include NSAIDs, infection by a bacteria called H. pylori, alcohol, bile salts, acid and pepsin.  Patients will present with symptoms of a gnawking, burning pain within the upper abdomen that occurs shortly after meals.  If left untreated these ulcers may go on to cause obstruction resulting in nausea and vomiting, bleeding, or perforation (rupturing through all the layers of the stomach or duodenum).  Ulcers are usually identified using endoscopy where biopsies may be taken to detect whether the H. pylori bacteria or cancer is present.  If H. pylori is present antibiotics in addition to acid suppression therapy as described above will usually allow for healing and resolution of ulcers and symptoms.  In ulcers caused by excess NSAID use that medication is stopped immediately.  Surgery is indicated in situations where people fail medical management or are unstable from a complicated presentation of the ulcer.  There are many surgical procedures performed for peptic ulcer disease.  The type performed usually is dependent upon presenting symptoms and level of stability.  They include oversewing of ulcer in the case that it is bleeding, and patching the ulcer in the case that it has perforated.  After both of these, treatment for H. pylori and acid suppression is indicated.  Additionally, vagotomy (cutting the vagus nerve which stimulates acid release) and pyloroplasty, vagotomy and antrectomy with reconstruction or highly selective vagotomy can be performed for refractory or complicated peptic ulcer disease.

The small intestines is the portion of the GI tract between the stomach and colon.  This is where additional digestion takes place but where most of the absorption of food takes place.  Digestion is aided by bile and pancreatic juice which will enter the intestines. There are three portions of the intestines including the duodenum, jejunum and ileum.  In the average adult the intestines measures almost 25 feet.

There are many issues that can take place as a result of the small intestines.  As surgeons we often encounter people who have a small bowel obstruction.  This is essentially a condition in which a portion of the small intestines has become twisted or kinked resulting in people having cramping abdominal pain with associated distension of the abdomen and nausea with vomiting.  The twist or kink does not allow food, air and digestive juices through resulting in the above symptoms.  This can be a result of hernias in which small bowel becomes trapped and twisted off or as a result of scar tissue from previous abdominal surgeries that can cause mechanical twisting.  Less often it is a result of a mass or tumor within the small intestines.   Management of this condition usually requires admission into the hospital with fluids and electrolytes given through an IV for dehyrdration and decompression of the GI tract using a nasogastric tube (NG tube) which will suction out the food, digestive juice and air trapped within the upper portion of the GI tract.   A vast majority of the time these maneuvers will treat the obstruction and the GI tract will open up on its own.  However, in some instances a surgery is necessary in order to identify the kink and remove involved bowel that may have died.  Should the obstruction be secondary to a hernia or mass this will almost always require a surgery.  Additionally, if a person has never had surgery before and presents with an obstruction a surgery is often necessary to determine the cause.

When encountered surgical intervention with resection of the portion of the small bowel is usually involved.  After resection the two cut ends of the intestines are brought back together using staples or sutures.

For more information on some of the above disorders please visit the following website: 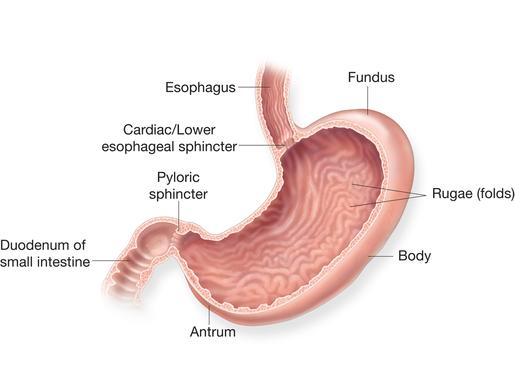 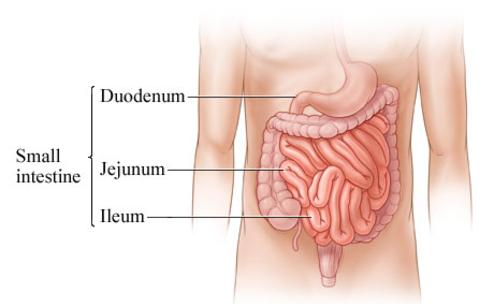 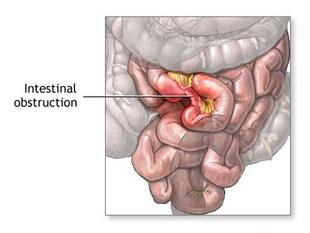 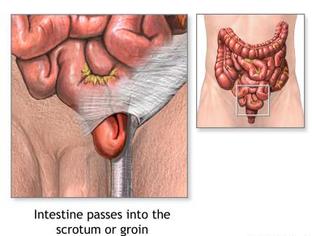 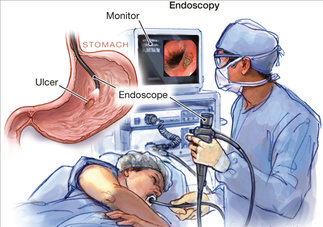 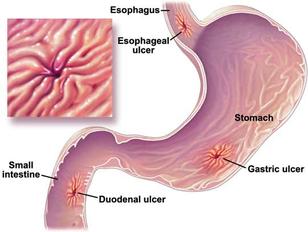 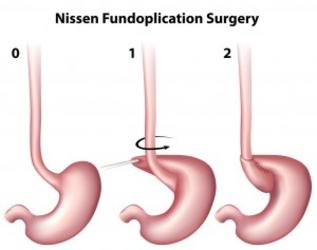 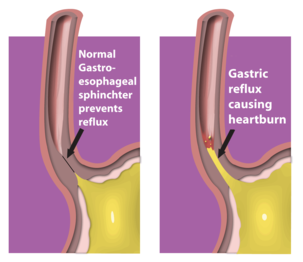